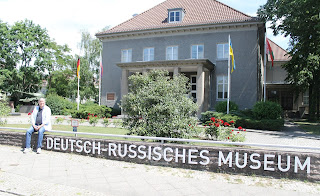 I told you about John P. in my post for this month. He is visiting family and friends in Germany. We agreed to meet last Wednesday for he wanted to see something of the area where I live.

The weather was very good so we set off on bicycles and started with a tour around Tierpark. This is the largest zoo in Europe in terms of area. It is not really a zoo but a large park with animals in different parts. We didn’t have time to go inside but we toured around the nearby urban area. It is composed mainly of 1970’s high-rise blocks of flats. 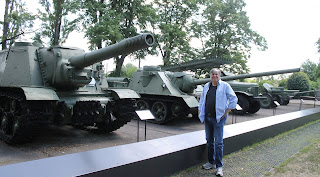 We then headed towards the south of Karlshorst and arrived at the German-Russian Museum. This was the main focus of his visit. Here is a photo of him outside the museum. It was built from 1934 on the orders of a certain Herr H. as part of a large complex used for training military officers. It was then used for senior officers for accommodation and meals.

On the 8th May 1945, a group of military men met to sign a document which ended the 2nd World War in Europe. At the back of the museum you can see a range of Russian tanks and other armaments used in the war and to take over Berlin. John P. was most impressed by the very detailed documentation in the museum.

After that we had a late lunch, saw the original area of Karlshorst and horse race track opposite before heading back to my place. John P. was flying home next day and had to be at the airport at 4.30 am! Looking forward to his next visit to I can show him other things most tourist don’t know about – and share that visit with you.