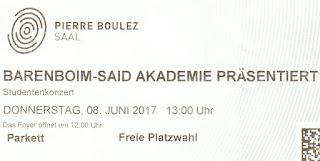 I went to a lunchtime concert with Jutta earlier today. Really nice to spend some time with her. It was her first visit to the ‘Boulezsaal’. I posted about this before. It is promoted by Daniel Barenboim who we saw when I had a coffee before the concert.  The concert was well attended and the audience very appreciative of the young people giving the “Studentenkonzert”. What amazing talent they have.

The Brexitlanders are voting in a general election today. I thought about them as I settled into my seat and the music started. I wonder what the result will be.