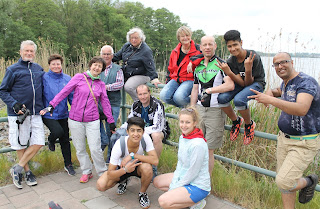 Yesterday really was a great day. I thoroughly enjoyed it and didn’t want it to end. It started at 8.45 am when I met most of my Müggelsee-Gang at my local railway station. ”The Boyz’ also arrived and with Papa. We managed to squeeze into the Regional Train and put our bicycles into the bicycle section.

The squeeze got tighter as more and more people tried to get onto the train at each stop. I was surprised to see many women trying to get prams and babies into that section of the train. They had no success. Still squeezed into the section we finally arrived at Potsdam, where we all spilled out onto the platform – and could breath out again!. 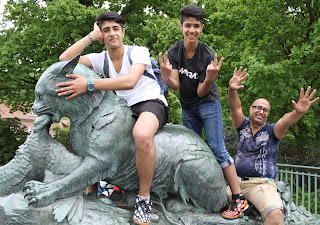 Off we went, led by Uli who had organised the even,t so BIG thanks to him. The first stop on the lakeside was at a large restaurant area with a stage and lots of people all eating roast sausages, drinking beer, singing along to the music and smiling. The latter was most important. It was nearly 11.00 am so I had a late breakfast of sausage with a glass of locally brewed beer. I was not the only one!

More cycling around the lake with a picnic stop, then off again with a later stop. Near the final stop was a bridge with some creatures. ‘The Boyz’, including Papa, could not resist sitting on the creature and doing a few poses. Here is one I like.

More cycling and back to Potsdam station. Again the train was full but I was able to squeeze in with ‘The Boyz and Papa’ as we waved goodbye to the rest of the Müggelsee-Gang as many took other trains home and some waited for a later train. Thanks to all for a wonderful day and let’s have another day out together as soon as possible.