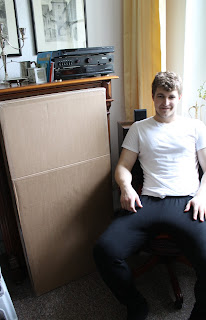 This morning Daniel arrived with muscles ready and usual smiles to ‘Do The Job’. One month ago I bought a new writing desk then had to wait so long for delivery! It arrived last Thursday. Daniel does regular training and has muscles in all the right places so picking up the desk parts would be no problem. And so it was.

The first thing was to move the TV to the old desk. That was heavy work but he did it with no problem. Then moving other things such as the computer, printer, audio system etc. Finally we had the corner of the room free to set up the desk. 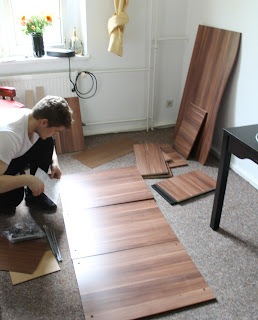 We unpacked the parts and put them onto the floor. We found installation instructions on one piece of A4 with parts missing – and the rest was difficult to understand. Fortunately Daniel has more patience than I and with his mathematics, physics and logic studies was able to work out what the mysteries on the A4 meant. 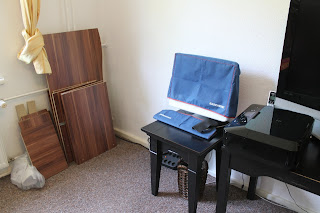 So far so good. I brought my work box into the room full of things such as screwdrivers. After working out that we needed to connect part C to Part C1 then with H, off we went. We then noted that part H had no drill holes to connect to C and C1. Checking the A4 it said again that the connection had to be made using long metal screws but with blunt ends!

After 15 minutes of screwing a blunt metal screw, without success,  we gave  up and had a coffee break with some apples slices I had bought ready for such an occasion. We decided to try again but with screws and then replace them with their blunt ended brothers. No success! We did not have an electric drill with exchangeable parts and that was the problem. I told Daniel to stop work, which he reluctantly did.

We packed the desk parts into a corner as you can see in the photo. Now he is going to talk to his Papa who knows more about such things than we do. Hopefully we shall solve the problem later in the week when Papa and Daniel have time to come to my place. Who said assembling things bought from furniture markets was easy :-((