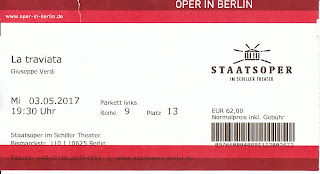 Last Wednesday evening, Johanna and I went to the Staatsoper to see Verdi’s opera La traviata. It means ‘The Fallen Women’ in English. Our visit there was courtesy of Birgit. She had bought two tickets but due to illness could not go. She gave us the tickets. Very generous of her.

The opera was in Italian with translation to German on a screen at the top of the stage. The performance was first class. I was very pleasantly surprised to see/hear such a professional performance. I was particularly impressed with a singer called Ailyn Perez who sang/played the main role. 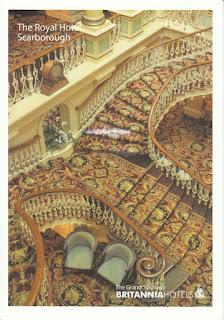 I was interested in the origin of what is now the most played opera worldwide. You may know some of the arias from recordings made by Maria Callas and still worth listening to. La traviata is a three act opera by Giuseppe Verdi. It runs for 2 hours 10 minutes without a break so have a drink before the start!

Verdi set it to an Italian libretto by Francesco Piave. This is turn was based on La Dame aux Camelias (1852) which was a play adopted from the novel by Alexander Dumas. Phew … but what a history! It was first performed in March 1853 at the La Fenice opera house in Venice. Then it was performed in London in May 1855, in New York in December 1856, and in Paris two day later.

In case you don’t know, it is about a courtesan torn between the love of two men who is slowly dying of consumption.

On the same day I got a postcard from Alan and Lynne. They had a holiday break in “Skeggy” = an English east coast resort called Skegness. I guess they also went to Scarborough from where they sent this card. It is of the staircase in the Royal Hotel. I think Verdi must have walked up/down many such staircases in his lifetime. Perhaps when he was sketching the music for La traviata in his head!