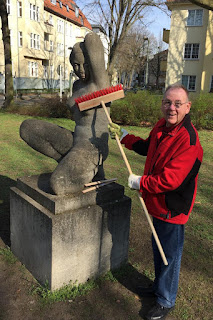 Here is a photo of me cleaning a lady’s left armpit. Why? She couldn’t do it herself! It all happened last Saturday morning. There is a tradition here to mark the advent of Spring, when people go out and clean public areas.

In Karlshorst, this is usually done by members of political parties and the local citizens association. The latter organises the event and provides the cleaning material. As a reward for our work we get a plate of hot potato stew with a large sausage on top to put back the energy spent on cleaning.

I was with the SPD group and our task was to clean the area around the S-Bahn/Rail Station. After that we cleaned up two parks. I found this lady in one of the parks. She whispered to me that she would like a quick Spring clean.

I quickly responded but did not have a hosepipe so all I could do was give her a yearly ‘brush down’. She smiled throughout and thanked me at the end. I promised I would do it again next year and she said she was looking forward to that :-))

The evening before I was at our local SPD annual reception (der Jahresempfang) with Johanna. It was her birthday and we had enjoyed a long breakfast with the Kowalka Gang at her place. It was her first time at such an event and she enjoyed it. It is basically to get members together socially. We were met by glasses of sekt and later for supper with a range of wines or beer. Yes, a very nice time!