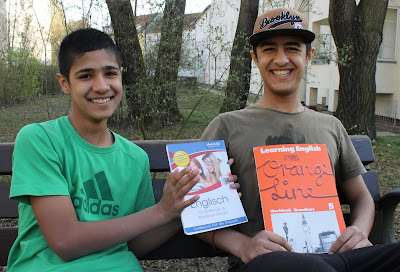 I am pleased to share some very good news with you. Jump back to yesterday when ‘The Bros’ called to ask if they could visit. They duly arrived and then the big smiles started. Bro1 said he had news for me.

I guessed correctly it was about permission to stay in Germany. He then said they had got a letter from the responsible office to say the family had permission to stay another three years with possibility for further extension! WOW!! Lots of big smiles and hugs.

Bro2 then said there was a problem to wash/shower in the home/shelter where they live. I did not believe him for I know his parents are very attentive about personal hygiene. I am sure it was his way of asking to enjoy the privacy of my bathrom. In the home there are only shower rooms so the males shower wearing underpants and only have cold water! 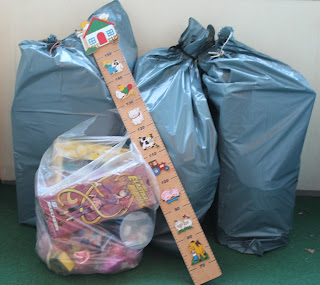 Bro2 disappeared into the bathroom as I took Bro1 into the garden to do some English homework. He recently good very low marks in English at school so that has pushed him to learn more. The weather was really nice. We’ve had sun and blue skies for a couple of days with temperatures of 20°C plus. Just my kind of weather.

We had tea and cakes in the garden then Bro1 went to the bathroom to shower while Bro2 sat with me in the garden and did some basic English exercises. He does not have English at school but he will from next semester. Here you can see a photo of them with books.

I then took delivery of four large bags of children’s toys, books, games and a range of learning activities. All donated by Barbara and family. She is in my Tuesday English Gang and had asked me if she could donate things for children in the refugee home.

I was surprised at 4 bags but the kids will really enjoy her donation. Here is a photo of three and a half bags. The Bros took half a bag to give to their sister. They will take the rest after further visits. There is only a limited amount you can get on the back of a bicycle!