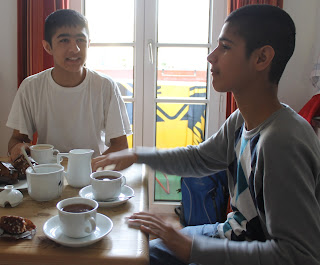 Yesterday some words were said to me for the first time ever. Let’s start at the beginning. The Bros called me early Saturday morning to say they needed help and could they come to my place. I said yes and they duly arrived. Bro1 needed help with English and Bro2 for his German homework about the French revolution. What a mixture!

As they settled in they told me about racial abuse they had recently received at their schools. I listened and let them talk. The abuse came from four German boys in their respective classes. I explained that the abusive boys had a problem and they should not react, but ignore them and walk away. Both had reported this to their teachers who had responded by having a discussion on the topic in class. Even so the verbal abuse continues. 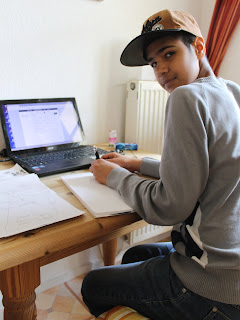 After some time with tea and cakes, they started their homework. During a later tea break Bro2 talked about his family in Afghanistan and said I must be as old as his grandparents. Grandfather died some years ago. I just let him talk. We finished the English homework and I told them to return on Sunday so we could do Bro2 German homework.

They arrived as agreed. Bro1 did more English as I concentrated on Bro2 and his German. Suddenly he told me he had thought about our conversation when he was alone on Saturday evening. He said he had cried at the thought of my death. No one has ever said this to me before!

He lowered his head and stared at the floor as he quietly said, “I  don’t want you to die.” No one has ever said this to me before. He glanced at me then returned to looking at the floor. I said nothing. Long silence. I put out my arms and held him. He let me hold him. More silence then he whispered the words again. Tears formed and slowly ran down his cheeks. I just continued to hold him in silence.

I then whispered that there was nothing anyone could do for it was part of Nature and covered everything on the planet. We had a small discussion about Nature before I directed him back to completing his homework. Here is a photo of him doing his homework and having a break with Bro1.

I have not been able to forget his words and how he said them. Whenever I close my eyes, or drift off into vacent thoughts, I relive those moments.