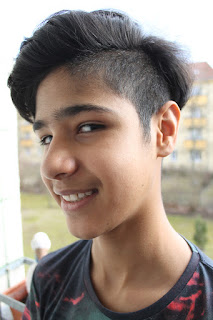 Part of the family arrived just before 10.00 am as arranged. Papa, Son2 and daughter greeted me for the first time since the end of last year. We settled into catching up on news as we sipped green tea and munched cakes. Papa and Mutta have an important meeting on Tuesday about being able to stay or have to leave.

There were other discussions about my new internet and tv boxes and connection. We also went through bags of clothes donated by my Kowalke Gang. I needed help with the front brakes of my shopping bicycle so Papa, Son2 and I went into the cellar to repair it. 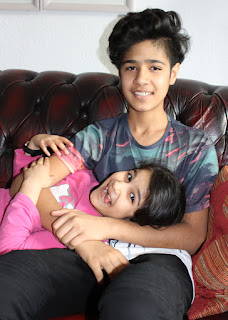 We left daughter alone. On returning we could not open the door. For some reason daughter had put the security chain onto the door and locked it! Papa and Son2 tried to explain what to do in their language. She either could not understand or not do it.

I got permission from my neighbour to go to his balcony and from there Son2 climbed onto my balcony. Dangerous! Daughter opened the balcony/kitchen door, as directed, and Son2 entered. He could not open it so I told him to open my workbox and take out a hammer. He was then able to open the security chain and the door.

Daughter got a severe telling off but did not answer why she had done it. Before this unfortunate event, I had taken photos of Son2 and his ‘modern’ hairstyle. What do you think? There is also a shot of him with sister before she played around with a security system she did not know about.

Tomorrow I’m off to Hönow to visit Oldie H. Next week I have no teaching because the building is being renovated so I have more time for myself. Looking forward to that!