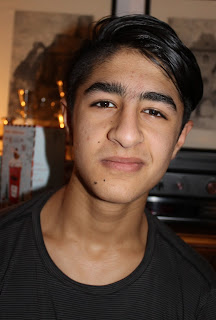 The Family came to my place on Christmas Eve, arriving just after 3.30pm. It was a double celebration for Son1 was 16 on that day. We start with a photo of him looking very ‘grown up’. I had loaded the table with cakes, tea and lots of soft drinks, but before they could ‘tuck in’ they had something to do. 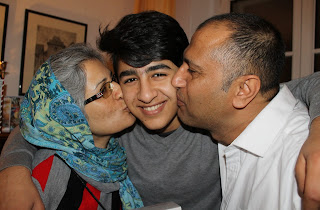 I put the children in a row and gave Son1 a knife. He had to open my cards and give them to Son2. He had to scan the text and announce the name of the person/family who had sent the card. That done, he had to give the card to sister. She then had to put it on one of two flat places I had prepared. They enjoyed this activity and everyone broke out into BIG smiles! 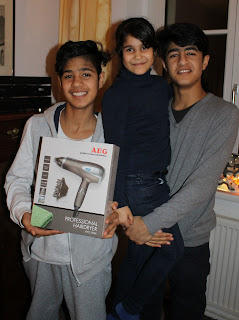 Then they could tuck into round 1 of cakes and drinks. After that it was time to celebrate ‘The Birthday’. We all sang ‘Happy Birthday To You’ then I gave him my present. A card with some money inside. He really smiled at that! More cakes and soft drinks before we moved to the seasonal part of our meeting.

The parents asked me questions about Christmas and the different kinds of cards I had received. Some with Christian images, but most without. I explained the tradition and differences. The children listened with great interest. Then it was time to give them Christmas presents. I gave the family a hairdryer. They had earlier told me they needed one so it was not a difficult choice. 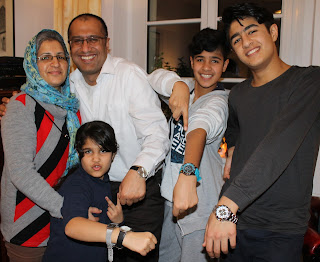 Next were presents for the children. These included a shawl for the daughter plus three notebooks. Then I distributed other presents sent by Paul from my Tuesday Gang. The main gift was a selection of wristwatches. They were very surprised by this for only Mama had a watch. Now she has two! The boys immediately went for the two blue ‘sporty’ watches and a big silver one. Papa took the traditional silver one with a black strap and daughter took the small silver one. 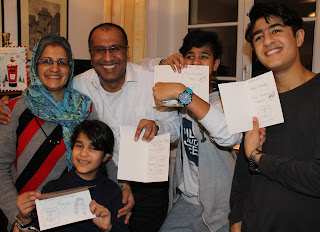 Here you can see the family posing with the hairdryer, the watches and with big smiles. Again a break for more cakes and fruit-jelly puddings before the final share out. I got them to stand in a line and handed out cards to each. At the command ‘GO’ they opened their card and read the message. Lots of raised eyebrows before huge smiles broke out on happy faces.

Peter L. had transferred money to my bank account as a Christmas present for the family. On each card I wrote a message then the words, ‘Credit of €40.-‘ From this you can work out the total Peter sent to me. I told the family they could not have it in cash. They would have to tell me what they wanted, such as clothes, boots, school things, then we shall go to the shop and buy them. I would keep the receipt to later show Peter how his donation had been spent. They happily accepted that.

The evening ended with them packing their presents, the rest of the food/drinks they had not consumed and saying goodbye with even bigger smiles! We are meeting on Thursday to go to some of my friends for lunch. Looking forward to that and I shall of course share the happy event with you on my blog :-)))