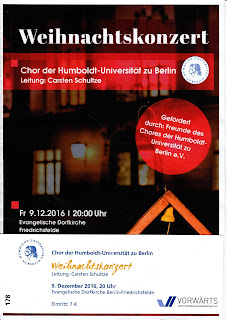 “Let’s cough again like we did last concert, let’s cough again for winters here. Let’s cough again and get it deeper. Do you remember when you coughed much louder. Let’s wheeze, splutter and clear your chest, for it sounds the best – coughing time is here!”  Tra..la..laaaa. I wonder if it will go into the Top Ten?

Last Friday evening I met Gerald and Jutta in the church opposite to where they live. It was my first visit and surprised to see nearly every seat taken and only about five people younger than 60!! It was a Christmas Concert given by Berlin Humboldt-University Choir led by Karsten Schultze. As they marched in to take their place at the front, the coughers turned up the volume. 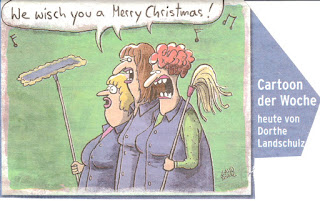 There then followed some cough-barking and whooop, whoops before the choir sang the first note. A group of ‘Grannies’ to my right hadn’t noticed and continued talking to each other. Lots of schhhhhhhhh followed before we could then hear the choir.  I think you have got the picture. They also sang The First Noel in English with very good diction. An old couple in front of me coughed their way through it. When she stopped, he started :-((

It was rather cold in the church and I had a feeling I was starting with a cold. I could hardly sleep last night and have lost count of the number of tissues I have used. I’m cancelling training tomorrow morning and off to the Drs.

Yesterday I found another joke in my local paper. Here it is. It is a word play between English and German. The singers are cleaning women and they ‘wischen’ for a living = to wipe/clean. If you take the verb and add we, it should be wir wischen, but you will not get the sound so it has been changed a bit to make it sound like the English word ‘wish’. Got it?  Now where did I put my tissues?