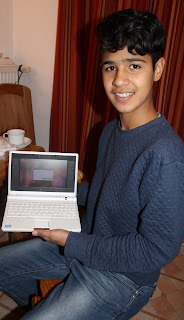 I had visitors on Monday evening. You know them from earlier posts. The story began last week. Paul from my Tuesday English Gang gave me a bag of musical things to give to the family. They included a CD player, earphones, transistor radio and a number of music CDs. The ‘lads’ arrived on Monday to see the gifts. 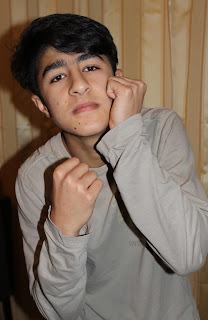 It only took a few minutes for them to say they would like all – and with big smiles! Break for tea, fruit juice and cakes then to the next phase. I put son2 between Papa and son1, then placed my old(ish) Asus Eee mini-laptop onto the table. I told son2 to open it and for the others not to help him.

Son2 did all that and opened files, e-mail accounts, looked at photos and generally became the boss of the baby laptop within ten minutes. I just stared and wondered how he could do that! I told him he could take the machine home and share it with his brother and sister. Then came the BIG SMILE. You can see that in this photo.

He then went back to seeing what the baby laptop could do with help from Papa. Meanwhile, I got into conversation with son1 about sport and his new boxing lessons. He told me about the moves he was learning then gave me a demonstration. Here is a shot of him with one hand defending his face and the other getting ready to PUNCH. Ouch!!

Now little brother wants to take up boxing. He can’t yet for he does not have any gloves or gum shield. Wonder if Father Christmas can help :-))