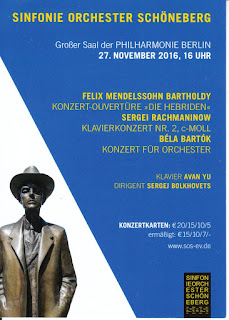 I told you in my last post that I was going to a concert at the Berlin Philharmonie on Sunday afternoon. Music played by Sinfonie Orchester Schöneberg. This is a local, amateur orchestra. I support it because they give any profits to buy instruments for talented children from poor homes.

The hall filled, the orchestra players took their seats and then I noted the first coughs. Some deep and repeated, some high and almost apologetic as the cougher tried to control or stop the cough. To no avail. There then followed the next phase. This is the clearing of throats. I wondered if any composer had written a ‘Cough Along Symphony in A Flat’.

The concert started with Medelssohn. Applause for that was accompanied by coughing and more throat clearing as Avan Yu came on stage to play a piece by Rachmaninow. Quite periods in the piano concerto allowed us to hear a bass throat clearer to my left and a sneezer and cougher to my right.

This piano player is someone to watch. He is only 26, was born in Hong Kong to Chinese parents and grew up in Canada, studied in Berlin and now lives here. A great mixture and what a talented player. He is totally absorbed in the music he plays. The coughers also liked it for the gave extra coughs as the rest of us applauded a superb performance.

More throat clearing and coughing took us into the Bartok symphony, which ended the concert. As I left the hall I decided to cough and clear my throat to show any listener that I could do it too :-))