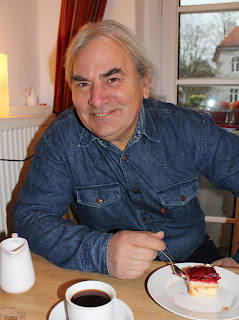 Yesterday Imre arrived in my part of Berlin. We met near the S-Bahn station and went in search of a place for lunch. We finally settled on a soup-cafe not far away. Very healthy for they make two soups a day. One with and one without meat. We took the veggie option. 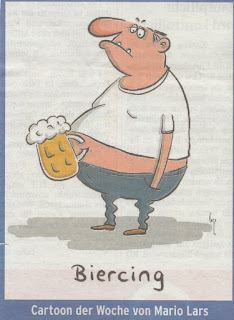 I also caught up on his news. He works a lot outside Berlin now so I heard about his adventures and plans. The big news is that he is flying to Manila in mid-December. He has got to know a lady there and decided to spend some time with her. What a good idea! We talked a lot about that as we took a gently stroll after lunch.

Later we arrived at my place for ‘Kaffee und Kuchen’. Here you can see a photo of him enjoying that. Later he showed me lots of photos of his summer in Hungary. He laughed loud at his shape then. Let us just say ‘largish’. He has since been on a diet and lost weight. I think that has something to do with meeting his new lady!

I later looked through a local paper and found this joke. It reminded me of Imre’s old shape and I just liked the interplay of words and meaning. You do of course know that das Bier means a beer. Must see if I have any beers in the fridge :-))