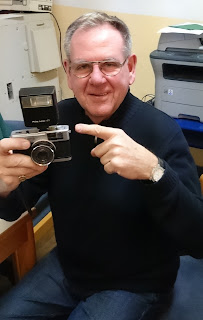 Last Friday afternoon I took two S-Bahn trains and one U-Bahn train plus a short walk and arrived at Falckensteinstr. Community Centre. There I met Stefan and my Photoshop Gang to start a new round of meetings. We hadn’t seen each other since the end of June when our long summer break started. 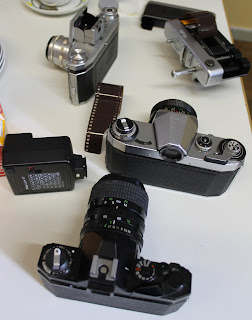 Lots of catching up on what had happened in summer, who had been where, and what had they done. This happened as we sipped coffee and ate cakes. Then Stefan told us about the content of the next sessions to take us to the end of the year.

He had picked the theme of ‘Analog trifft Digital’. He had been given a number of old analogue cameras from the 1960/70’s. A few of us had also brought along our old cameras. Here you can see me with my Olympus Trip 35 which I bought at the start of the 1970s. I added a Prinz Jupiter 177 flash to it. Both were made in Japan.

Others had cameras from the GDR and other countries. We had a great time getting to know them again, adding a roll of film to each before setting off into the neighbourhood to test them. We all took a number of shots as Stefan took photos of us taking photos, but he used his modern Nikon digital camera.

We are later to work on these shots and photos via our Photoshop computer programmes and then present the results at a public exhibition at the end of the year. Looking forward to learning more about how we can do this.