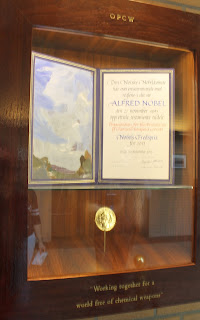 After watching Jan’s team play football we returned home, picked up Arancha and headed for another district in Den Haag. It is full of large offices and buildings such as Europol = European Police Central Office. Near to this building is one that houses two tribunals.

It was The Hague International Day 2016. That means it was an Open Day and the public could enter the buildings, see exhibitions, films, lectures, discussions, talk to members of staff and generally learn what happens in the buildings when access is closed. 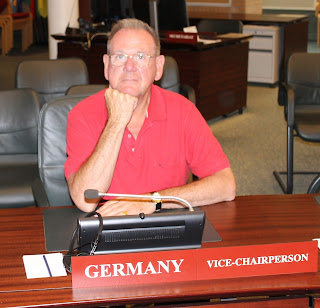 You had to register in advance and show some kind of ID to enter the buildings. Jan had organised all this before I flew there. I was really interested to see/hear what they do and the more I learnt the more I wanted to know. I learnt that the OPCW is the implementing body for the Chemical Weapons Convention which is made up of 192 States. 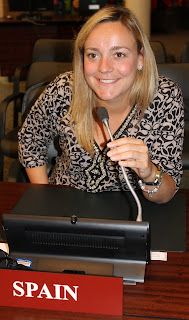 By now, almost 93% of all declared chemical arsenals have been destroyed under OPCW verification. There are still four states which will not allow access to their chemical arsenals. Even so it is a remarkable achievement in disarmament. The OPCW was awarded the 2013 Nobel Prize for Peace. Here is a not very clear photo of it.

We went into the conference hall and listened to a presentation. Unfortunately there were two representatives missing. One from Germany and one from Spain. Being nice people, Arancha and I volunteered to represent our countries. We took part in the debate and found it all very interesting. Here you can see photos of us participating in the meeting.

We ended our tour and went to the seafront to an Italian restaurant they had heard about but not visited. We settled into our seats and enjoyed the food before returning home and relaxing. In my case to get ready for my flight back to Berlin. A very memorable day and I liked being an Ambassador :-))