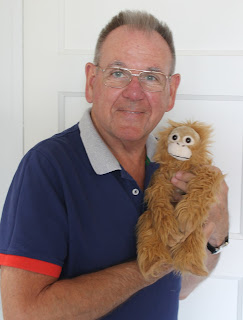 I have a new friend. His name is Alfie der Affe. Here is a photo of me holding him. He was rather tired so I picked him up for the camera. I met him when I visited Jan and Arancha last weekend.

When I entered their home he was asleep in the bookcase. After he woke up he jumped around and asked me who I was. We had a good chat between his jumping then he decided to relax again. 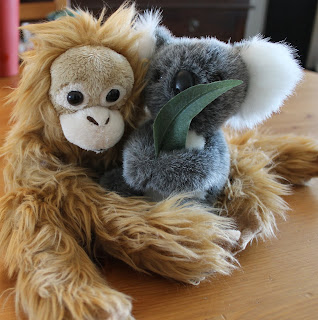 He has a good friend called Kid Koala. They do everything together.

Kid is a bit younger so relies on Alfie to explain things including how to live with humans. Not easy I can imagine! Kid is very quiet compared to Alfie. He only speaks when you speak to him and he has a very soft voice.

I told him I liked his fluffy ears and he replied that I wouldn’t if I had to wash them. He said it takes ages for them to dry after washing. I suggested he use a hair dryer. He asked Alfie what that was. Alfie didn’t know so I changed the subject to what they do most of the day. Both answered ‘Sleep when not waiting to be fed’.

I said goodbye to them yesterday morning when I left to take the train to Schipol Airport in Amsterdam for my flight to Berlin. They said they had enjoyed meeting and talking to me and that they looked forward to my next visit. Nice to have new friends!