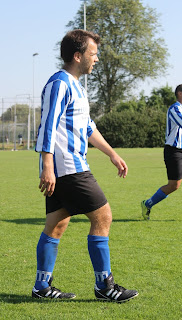 Sunday morning and I was in the land of the big ZZZ’s. A gentle hand shaking my shoulder woke me. It was Jan to tell me he had made tea and I should have a quick shower for we only had half an hour before we had to leave for football.

Jan has played football since he learnt to stand up and run. I’m really pleased that he still plays and enjoys it. He has played in teams in every country he has studied or lived in. I think that has given him a certain skill and knowledge of players and the game.

Into his car and off we went. I think we drove north-east towards the coast and Amsterdam and landed in a sports area with three football fields. He went off to change and I settled into a nearby ‘Kantine’ for a breakfast of tea and a cheese sandwich. What else can you put in sandwich when you are in the Netherlands? 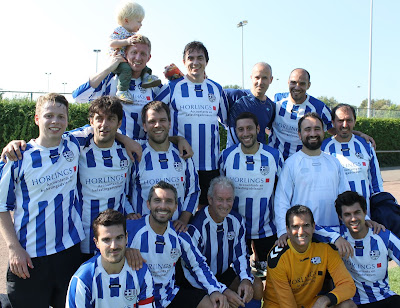 I then set off to find where he was playing. I asked some locals where the team from Den Haag was playing and was told in Field 6. I went there but couldn’t find him. I looked at the team bench and thought I saw him sitting in reserve. I watched the first half then decided to look further.

Outside the changing rooms I saw him and he said his team was playing in Field 4 – and that his team was not called Den Haag!!  I settled onto his team’s bench and got into conversation with some of his team players. I noted some of them were Spanish speakers although they spoke very good English.

As the second half started, Jan’s team had two goals but the opposing team had three goals. I like to think my presence changed all that :-)) The game ended with Jan’s team winning 6:5. I asked the team if I could take a photo and they instantly jumped into position. A very nice morning and match!