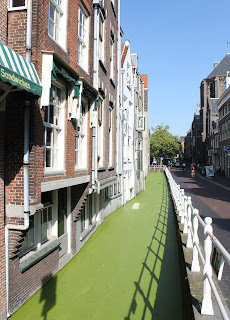 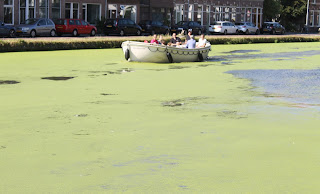 Delft is an old town south of Den Haag. It is famous for its old buildings and market square which hosts a large market each Saturday. We headed there after a late and lazy breakfast. 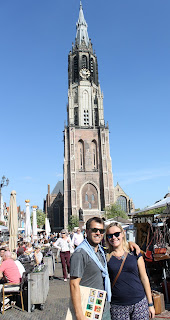 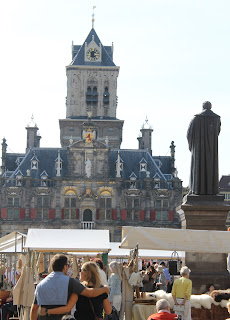 We got the bicycles ready and off we went. The weather was sunny, warm and with clear blue skies during all of my stay. I should add that it was the same in Berlin and a couple of degrees warmer.

We slowly and gently cycled south along a river/canal route. The water was green. I think it came from cutting grass on the river banks but I am not sure. It even filled all the little waterways in the town, as you can see.

I really enjoyed the ride and seeing changes in the flat countryside as we journeyed south. All the roads had wide bicycle tracks and there were lots of cyclists. There were also lots of  people on mopeds using the cycle tracks, which surprised me for I consider that dangerous.

We wandered around the large market and I noted at the range of home made and traditional goods on sale – including different cheeses! The market is in the area with a large church and tower on one side. On the other side there was the town hall. You can see them in these photos behind Jan and Arancha.

We went into another square, found seats and we lads ordered beer and Flämkuchen. Refreshed, we wandered further and before we left we found a tent selling fresh fried fish. I could not resist having a taster. It was okay but not as good as you can find in and around Silsden!  Even so it helped my legs to keep moving as we slowly left Delft and returned to Den Haag.