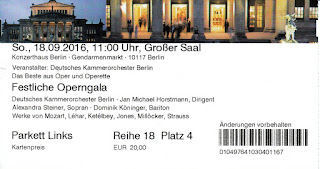 I went to a concert yesterday. Before that I went bowling with my Muggelsee Gang. I did better than expected and found I could not only lift the ball but throw it! Falk and Uli alternated for top place but that was no big surprise. It was great to later relax with them in a local Croatian Restaurant. I had fish with a glass of light white wine produced and bottled in Croatia. Very tasty. 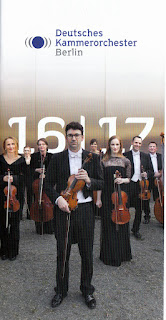 Two of this gang have a daughter who’s boyfriend is studying music and plays in a couple of orchestras. On Saturday night I enjoyed her company and on Sunday I had the pleasure of seeing him play French Horn. The weather even played along for we had blue sky and sun again. I arrived at the Konzerthaus in Gendarmenmarkt at 10.40, settled into my seat and watched the hall fill up.

Nearly every seat was taken and I saw only about ten people younger than fifty! The programme was easy to listen to. The first half was based on Mozart arias from his most famous operas such as Figaro, Don Giovanni and the Zauberflöte. The soprano and baritone were very good and seemed to be enjoying the event.

After a break, when I noted a lot of the Concert Oldies were sipping glasses of cool sekt!,  we all shuffled back into the concert hall for music from Gilbert and Sullivan. The baritone even sang in English and I noted he had a clear accent. This was followed by music from Lehar, Ketelby, Sidney Jones, Millöcker and Richard Strauß. What an interesting mix of music and greatly appreciated by the audience.

On returning home I found the documents I need to vote so off I went.