After the concert, I voted in the election for a new Berlin Parliament from which the government of Berlin is formed. The outgoing alliance was of the SPD and the conservative CDU. Berlin is a city-state and is one of sixteen states that make up the Federal Republic of Germany. 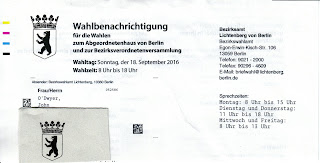 Forecasts indicated the collapse of the SPD/CDU coalition and the rise of a relatively new party called Alternative for Germany = AfD. They were right.

That is what happened yesterday. 67% of Berliners voted who were eligible.  The SPD emerged as the largest party with 21.6% and that was after losing 6.7% of the vote. The AfD entered Berlin politics with 14.2%. They are a populist right wing party, anti-refugee, anti-foreigner in general and some members are known to have links to, and/or are ex-NPD party members. This is the neo-Nazi party in Germany.

There is, and will be more soul searching about what went wrong and what to do now. I have just received an invitation from my local SPD to attend a special meeting this evening at 7.00 pm in my district town hall. Should be an interesting meeting.