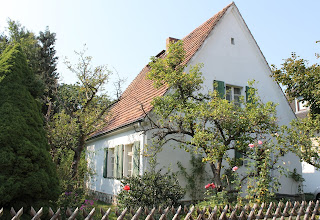 I had a great time last Sunday. It was my first visit to Andrea’s flat and I took the S-Bahn. Wonderful warm weather again and I was lucky to get onto a train at Ostkreuz. There was some kind of open air pop festival one station down at Treptower Park on the side of the River Spree. The place was packed with ‘early-twenty-somethings’. 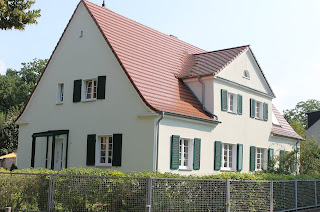 I continued and finally arrived at my station. I then got lost for there were two opposite signs for the street I needed. After a lot of wandering about and getting lost again, Andrea called me on my ‘Handy’. She gave me directions and I later rang the doorbell.

During my wandering to find the place, I took a couple of photographs of neighbouring houses. My problem is to decide which one I would live in. I really like the older and smaller one with its garden. The larger house has its charms but then it would certainly cost more. My feeling is still to move into the smaller house :-))

Very nice lunch followed by a family with kids arriving. We later went into a local park where the kids enjoyed the swings and slides. A really pleasant time and the sun was still shining as I made my way back to my part of the city. Thanks to all for a memorable day and next time I promise I shall not get lost! I wonder how much the smaller house costs!