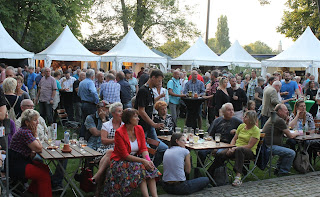 Whiskey = Ireland, Whisky = Scotland. The difference an ‘e’ makes :-)) After having new taps installed yesterday morning/afternoon, I did a few things then jumped into the 27 Tram. I left it at Köpenick Town Hall and went looking for some of my Muggelsee Gang. 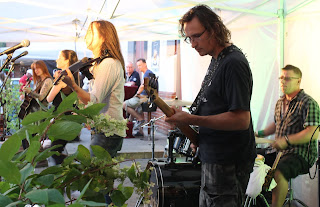 I’ve mentioned them a lot and told you about different excursions with them over many years. I got an e-mail from Falk saying some of the Gang were meeting to enjoy the “Köpenicker Whiskyfest”. I replied that I would join them. 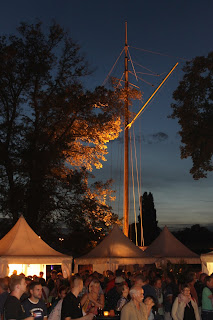 I went there last year with the same people and posted a story on my blog. It was nice to see them again and we soon found a range of whiskys to try. Yes, most were products from Scotland. We sniffed the glasses, sipped the first drop, said what we thought about the taste, then sipped even more.

It was a warm evening and I needed liquid so I bought a half-litre of one of my favourite beers. I returned to the gang where we managed to chat and exchange news over the noise of the band. They dressed and sounded like an Irish band until the introduced the next song.

They spoke perfect German, with no Irish/English sounds in their German. I guessed they were born in Germany with one parent coming from Ireland. The drinkers/audience joined in some of the songs and even danced along to the traditional songs. There was a really happy atmosphere.

I decided to find something from Ireland. I took my time to checkout each booth before finally finding one offering a range of Irish Whiskey. I selected one offering a strong peat taste and took it back to the gang. The first sip made my eyes pop out, my nose turn up and ears spin around! I had never tasted anything like it.

I sipped it slowly as the evening turned dark, the music continued and we sipped even more wonderful liquids from Ireland and Scotland. We are meeting in a few weeks for an evening of bowling but I don’t think there will be such a range of tastes on offer.