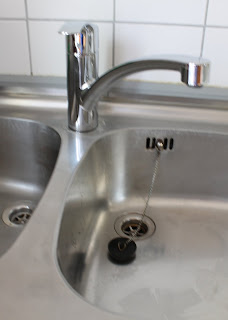 The thing we turn to get water is called a tap in English and der Wasserhahn in German. The plural is simply the taps = die Wasserhähne. Now look at the changes in the German from single to plural compared to a simple ‘s’ in English. The delights of learning German :-)) 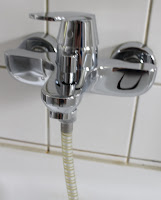 Last Friday morning I had to wait from 10.00 am for a knock on the door. The knock came at 11.10 am. It was the Wasserhahnmeister = the specialist to change taps and water pipes. I met him when he came to change the shower system in my bathroom a few months ago.

He started work on my kitchen sink. The pipes underneath the taps have been dropping water for some time. I watched with interest as he got to work and effortlessly removed the old and installed the new. While doing that, the Hausmeister (caretaker) arrived to see that all was going okay.

Such repair work is only possible be reporting a problem to the Hausmeister and it was good of him to drop in to see how the work was going. Then I got the surprise of the morning. They installed new taps on the sink in my bathroom and then a new tap/shower connection to my bath.

Wow!! — but I told them it was not my birthday and it certainly was not Christmas! They just smiled and said it was time I had a complete set of new taps. The taps certainly look shiny and new. Must keep them polished !!