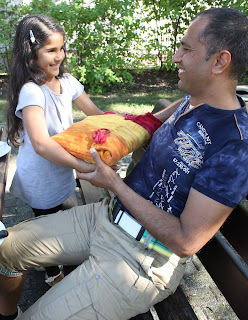 This post is a follow on from the report called “Family OK”. Scroll down 4 posts and you will find it. I told you about meeting The Family after my return from Bremen and giving them clothes sent by Gabi and Holger. I ended with a comment that I was looking for a laptop for them.

Move forward a short time which included a visit to a gentleman called Thomas. His father is in my Oldie Fitness Gang and told me his son had an old laptop. I invited myself round for coffee and cakes in a shot. Nice time and then I asked for the laptop. He just gave it to me with a big smile. 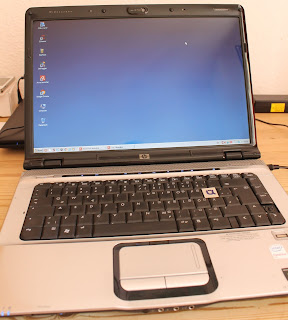 I gave him a small amount of money so he could buy an electrical gadget for his new laptop.We were both happy with the exchange. The amount was the same as that donated by Gabi and Holger in addition to the clothes. BIG thanks to you both :-))

By chance, I was shopping in the centre yesterday afternoon and who did I see? Yes, Father F, Mother P and daughter P. I bought some cakes and told them to come to the garden at my place. All now have bicycles so it was not difficult. We settled into the garden with ‘only’ 32°C (Same as today!) for kaffee und kuchen. 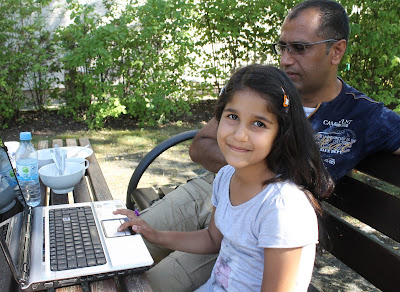 After that I got Daughter P to play along with me. She told Papa to close his eyes. He obeyed. Mother looked on with a big smile. I then gave Daughter P a bag to give to Papa. She did just that and then told him he could open his eyes. I think his smile was even larger than his eyes when he opened it to find a laptop in his hands.

What I really liked, and it made me smile a lot, was how Daughter P took control of the event after Papa had opened the laptop. She immediately looked for games to open but there are none on this laptop. I’m sure Papa will add some for her. Just look at how happy she is. That smile could melt an iceberg!

Meanwhile. I am searching for another old laptop for the children. There are a lot of language and school subject learning programmes that would help them. Any of you got an old laptop gathering dust somewhere??