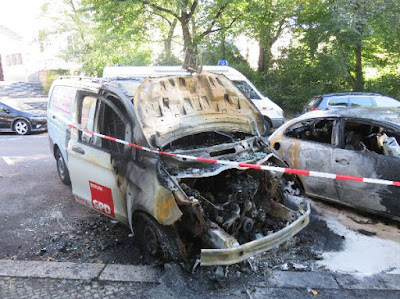 Der Brandanschlag in English means an arson attack. It happened last night to a SPD van being used in the current election campaign. The voters of Berlin go to the polls on Sunday 18th September to elect a new parliament which will then form the government. This is for the Federal State of Berlin. Do not confuse it with election to the National Parliament which also sits in Berlin.

The SPD van was being rented and a replacement will be offered tomorrow. The local SPD office has sent out details to all members. The local Lichtenberg Party rented it and it was parked outside the local party office when it was set on fire last night. The office is not far from Lichtenberg Town Hall where the local government sits. We are told that the police are investigating. I’m not sure that tells us a lot!

Who did it? We don’t know but there is more than one political suspect. I am doing a lot of work for the SPD in the next few days/weeks. I wonder if I should look over my shoulder more?