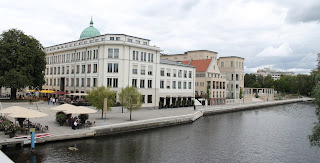 Wow, just seen that my blog has had 62,000 visits. Thanks for that. When I see such a figure I think about a comment from the author Neil Deane, ” You make the mundane sound interesting”. Last week I noted that I had more hits from readers in Russia than any other country. Perhaps they wanted to learn more about Silsden!

I logged on to report about my visit to Potsdam yesterday, but lets start with my return from Blighty now known as Brexitland. I settled in during the weekend and made time for myself including lots of reading, relaxing on the balcony with a book and even taking in the sun for an hour or two. I also caught up on telephone calls and made appointments for different things. 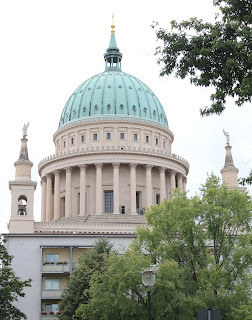 The background to my Potsdam visit is that Peter passed the interview for his doctorate and later got written confirmation. All this happened a couple of weeks ago when I was in Brexitland. The good news is that the Graduation Ceremony will take place next February and he invited me to attend :-))

I have talked about Peter before but briefly he went to school with Jan and grew up together, which in his case meant growing taller than Jan and the rest of their school gang. When he was fourteen I called him Peter von Long-Legs. The name has stuck and so now we shall have to call him Herr Dr. Peter von Long-Legs.

We met at the station and walked into the centre with stops at different places. The first one was a restaurant in a restored area next to the old Parliament building and on the river. I invited him for a meal to celebrate his new title. We then walked into town, saw the tourist areas, had afternoon Kaffe und Kuchen and slowly headed back to the railway station.

A very pleasant day and we plan to meet again in September after we both have done a bit more travelling.