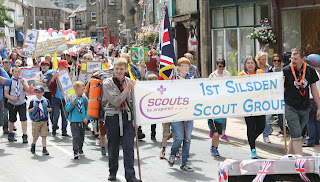 I know Silsden Gala was a week yesterday, but I needed time to work on photos to share with you. Yesterday I had a lazy day of finishing a book while sipping green tea on my balcony, and in the sun. I then prepared the photos. Yes, it was/is nice to relax in temperatures higher than in Silsden. At the moment it is 27°C on my balcony with blue skies. 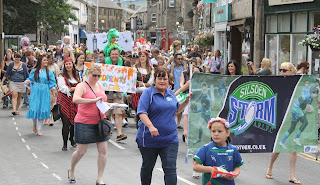 On Silsden Gala Day, Nicholas and family arrived to share the day with me. The procession started around the corner from the house where I was staying and I managed to save the parking space outside the house for them. We then had a glass of something nice from Gordon’s as we heard the music indicating the procession was about to start. 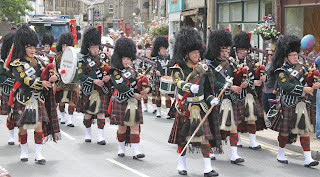 We walked along Silsden beck for all of two minutes until we got to the bridge at the Post Office and pushed to the front of the spectators. Just in time to catch a gang of Oldies bashing out jazz tunes at the front of the procession. There then followed various groups of people such as Scouts/Guides, local football association, church groups, dance groups, keep-fit groups. I think you have an idea of the participants. 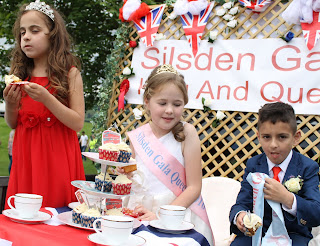 I really liked the kids in different groups for they were clearly more than happy to be part of the event. You can see that from the photos. At the end of the procession there is always a Scottish Piper Band. I don’t know why, even as a child, I have always enjoyed a bagpipe and drum band.

We took a short cut to Silsden Park (it was called the Playing Fields when I was a child!) and saw the procession arrive at its final destination. I was lucky enough to be next to a van carrying the young Gala Queen, with attendants, and hear her mother say. “Now you can eat”!

They grabbed the cakes and did just that. They had been staring at the cakes for a long time as the procession wound its way around the centre of Silsden so they deserved that treat. I really had to smile and hope it makes you smile too.