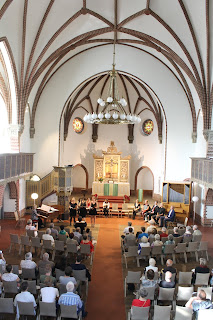 Silsdeners will be scratching their heads and asking themselves what it means. It means ‘transverse flute’. In my last post I said I was going to a concert. It was at Christkirche in Firlstrasse. It is one tram stop away from the training centre where I meet Kerstin and the Training Oldies each Friday morning. The weather was good so I cycled there. 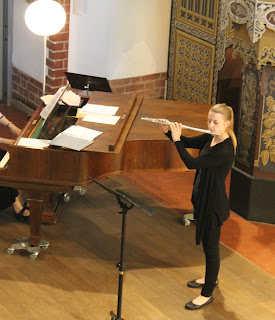 I met Ulli and Petra who you will remember are members of The Muggelsee Gang. One of their daughters, Amina, was playing Querflöte in a concert at this church. She also plays two other instruments and is studying music. It was a concert based on the church choir called ‘Jucantus’ which sang a range of songs in German, Spanish and English. Some old, some not so old but all sung very professionally.

Amina played a piece by Carl Maria von Weber. She also accompanied a young lady playing a cello and the pianist in other works. She played effortlessly and with full control of the instrument and performance. I really enjoyed the evening and talking to them after.

We all them went our separate ways to spend the rest of the evening watching the final of the European Football Champion. I expected France to win against Portugal, but they didn’t. Even so I enjoyed the play and the effort made by both teams.

I have now packed my bag so the next post will be from Silsden, probably on Friday. Until then!