Busy at the moment. Just got back from Hönow where I checked Oldie H is okay. I spent all yesterday there standing in for his family, who have gone away for the weekend. We went to a local restaurant where Oldie H paid for my lunch! I then made him go for a slow walk in a nearby park. 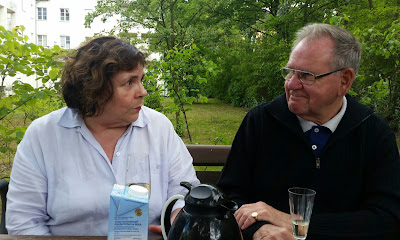 He stopped for a breather next to a set of training equipment. A girl was there with her grandmother and we got talking. Grandma thought Oldie H was my father and I was taking him out for a walk from the nearby Home for Oldies!!

She told me that the equipment had been constructed for Oldies. I immediately tried every machine. Grandmother told me what to do and what part of the body each machine exercised. Great fun as I went back to being ten years of age and in the playground at Silsden. 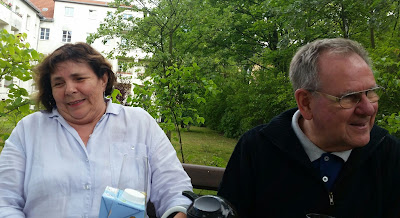 Last Thursday morning I played host to Johanna and Jutta for Kaffee und Kuchen in my garden. Normally it is in the afternoon, but they had other plans so we started early. As we sipped a cool glass of sekt, after the K&K, I remembered that Marita (pics of her with me)  was moving things into her new flat opposite. I went over and shortly after she joined us. The ladies soon got chatting as if they had known each other for years. I looked on and smiled. Wonderful happy atmosphere. We agreed to repeat it on my return from Brexitland.

When I opened my computer a short time ago, I found an e-mail from easyJet saying they had processed the refund on 28th June = one day after they cancelled the Liverpool flight. I opened my Debit Card account and saw that they had paid the refund on 29th June. What a surprise! Even so, they are now on my Only Go With Them When No Other Airline Flies There.

As I opened my blog to write this post I noted I had 60,009 visits to my blog since I started it. Wow – was that a surprise. I still remember Neil’s comment that I make the mundane interesting. Now to get ready and cycle to Firlstr in Oberschöneweide. There is a classic music concert in the local church at 6.00pm and one daughter of a couple in my Muggelsee Gang is playing.

Later there is the football final between France and Portugal. I shall be glued to the box for the final game. Perhaps you will too.