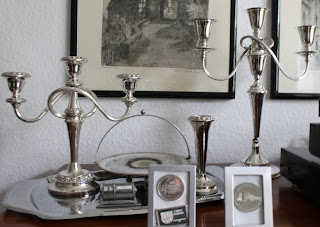 There is a saying in British English that, ‘Not all that glitters is gold’. True, as you can see from these photos of objects in my home. One of the silver objects goes back fifty years, others were collected over many years. All were stored in boxes and moved from cellar to cellar in different cities and countries. 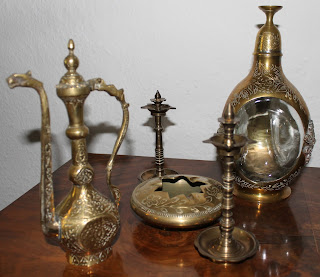 How did they see the light of day? The short answer is: Daniel. He collects coins and talked to me about this. During our discussions I mentioned I had a number of silver objects in my cellar. He asked to see them. I finally found them and he said I should put them in my flat and not return them to the cellar. He could not understand how anyone could leave them in boxes/cellars for so many years. 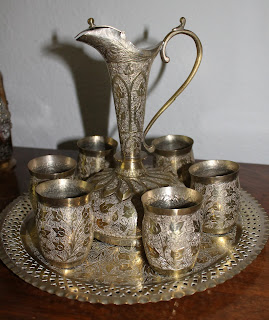 I then told him I had other objects in the cellar and he wanted to see those. Finally I brought all the boxes into my flat. He was surprised at the number and range. He then started to reorganise my living room to make flat surfaces to display them. It also meant buying polish to clean the metal objects! He particularly likes all the silver objects with the large candle holder his favourite. 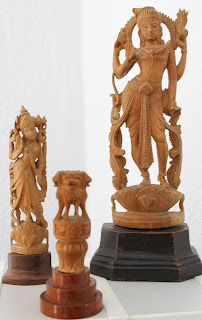 I have included a photo of three non-glitter-metal objects. They are carved from wood and represent different images of India. One of them is Daniel’s wooden favourite. Guess which one? No idea? Okay, I shall tell you. It is the National Emblem of India. It is the smaller one at the front of the photo. It has a name and this is Satyameve Jayate which in English means Truth Alone Triumphs.

It represents the Lion Capital of Asoka at Sarnath and was adopted as the national symbol on 26 January 1950, the day India became a republic. Well done India! Pity that other countries such as Canada, Australia and New Zealand did not follow your example but remained subjects of the English Monarch as the Brexitlanders do!!

The words on the emblem are written in Hindi/Devnagari Script and is a quote taken from the Mundake Upanishad, which is the concluding part of the sacred Hindu Vedas. I’m sure you all know that. I happily learnt such things in the early-1970s to prepare me to live and work there. Ahhhh…. happy memories!