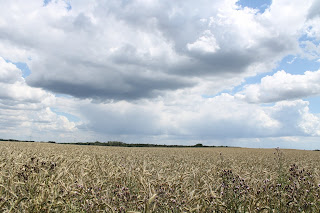 Yesterday I took the U-Bahn to Hönow to visit Oldie H. I also took my bicycle and rain jacket. The forecast was for showers in the afternoon but happily it didn’t happen. I think all the rain and cold winds are in England at the moment!

I found Oldie H. relatively well. He was able to breathe and speak better after treatment during his last hospital stay. The sun emerged so we sat in his garden and enjoyed the warmth. We chatted and had ‘Kaffee und Kuchen’ before  I left to cycle to Altlandsberg. 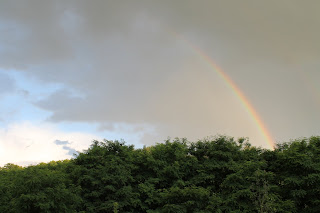 It was a new experience for me. Normally I go there on the S-Bahn from Berlin. This time it was to find the roads linking Hönow and Altlandsberg. It took longer than expected, and I had to stop a couple of times to ask the way, but I made it.

My hosts were Peter and Andre. They were waiting for me in their garden. I enjoyed chatting with them and catching up on news, mainly about their recent holiday in Spain and Marocco. We talked our way into the evening, through a grilled meal, and a few glasses of wine! It was good to see them again and the first time this year.

I then cycled to Neuenhagen where I just missed the S-Bahn to Berlin. While waiting for the next one I took a shot of the early evening sky which included a rainbow. Two minutes after I took this shot it started to rain – but only for three minutes!. Earlier I had taken a shot of a field and sky in Hönow looking towards the east. I really like this area as it unfolds and eventually takes you to the Polish border.