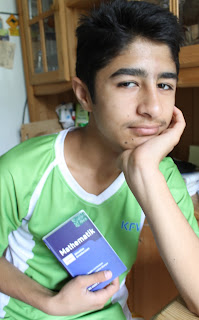 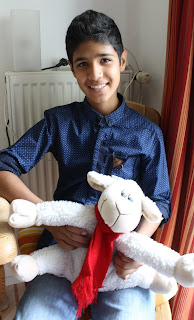 Just had a visit from Big Bro A1 and his Little Bro A2. I was very tempted to write ‘littlester’ after recently commenting on the declining language ability of Native Speakers! I was in contact with their father recently about a meeting before I leave. I had presents for them. He sent the ‘Boys’ on their bikes.

This time they spoke mainly German with me. They really are improving. The background is that I recently got a present of clothes and shoes for Mother and a sheep for the daughter. Yes, a sheep! The latter was a present from Jutta. It is actually a rucksack and she filled it with sweets. I wanted to give all to them in person but both are suffering from summer colds. 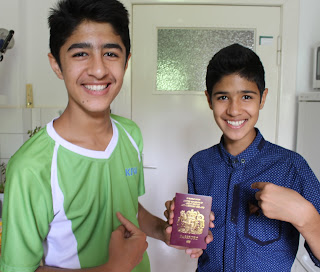 I also bought a book about Maths. The words are written in German but most of it is formula. A1 scanned through it and said he knew the formulas. Little Bro agreed to let Big Bro have the book first. I gave them some gap-fill activities in English and they merrily sat there sipping orange juice and doing the exercises.

They asked me about my trip to the UK and wanted to see a UK Passport and some English money. I obliged and they happily read through all the pages and then asked me who the women was on the 20 pound note. They had never heard of Liz II. I was pleased about that!

They said they wanted to go with me to the UK. I said we would do that in the future. I’m not sure how far we shall get with that given the Brexit mood on the island. Anyway, they left happy, smiling and thinking of the cakes I had given them to eat when they got home.

Only a few hours to go before I make my way to the airport. An earlier flight would have been better, but then there wasn’t one. Looking forward to seeing Pam when I arrive. More later.