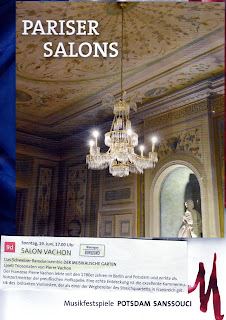 The history of Germany goes back to lots of people from the north of Europe wandering about and settling in areas. They were not called Germans until 1871, when Germany was created. The capital then moved to Berlin from Potsdam. It is a small city south-west of Berlin. It has a really interesting central area with parks and palaces. Put it on your list of places to visit. 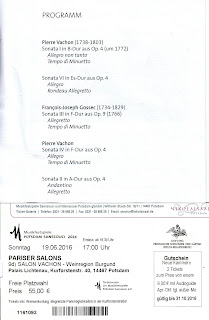 Yesterday I met Mathias and Sylvana, jumped into their car and was driven to the centre of Potsdam. There we found a place for a cool drink or coffee. It was a warm day and ideal for a concert. We met Sylvana’s parents who had organised the event before wandering into a nearby area called ‘Hollandische Viertal’ = Holland Quarter.

We later found a restaurant where I enjoyed a light meal and cool beer. Off then to Palais Lichtenau for a concert including wine tasting. What a great combination! There were about 100 guests and appropriately dressed for the occasion, as I was. There was none under the age of 50, but I noted the interesting fashions and styles of the elderly ladies. Very nice.

All the wine we tasted was from Burgand in France. We started with a light dry wine then moved into the concert hall. You could take a glass into the concert and sip it as you enjoyed the music. We listened to music from Pierre Vachon (1738 – 1803) and Francois-Joseph Gossec (1734 – 1829) I could have listened all day. Very well played by a quartet of young players – three of whom were women.

After the concert we sipped a Chardonnay from Burgund and I liked that better than the others on offer. We were offered more wines, including a red which I found rather tasteless, with different cheeses and slices of baguette, when we moved outside and sat in the garden.

A perfect combination of music, wines and cheeses. I could go to such a concert every day :-))