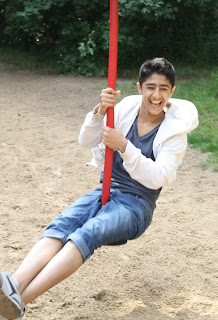 Last Saturday I cycled to the refugee home to meet my family and a nice German couple who also support them. The reason was to celebrate ‘Tag der Offenen Tür’. This translates as an ‘Open Day’. It means that the people who live there could meet local people and celebrate together. 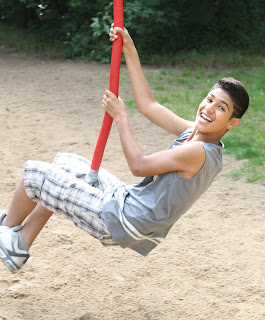 The programme started at 10:00 am with music from Middle Eastern countries. I shall not say which ones. Lots of refugees instantly formed circles and started to dance and smile! How nice to see them smile and move to the music. Even my family joined in the dancing and singing.

As I entered the complex I was greeted by the Mayor of Lichtenberg. This is the area in which I live. Many other local politicians were there as well as leaders of local community organisations. The programme continued with songs for children, Arab traditional dances, music from Africa, local German bands, more dancing and all with lots of things to drink and eat from a large grill area. It was clearly a successful day. 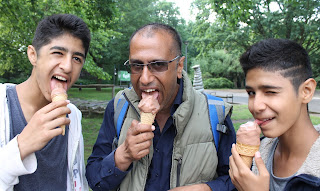 I met the family again on Sunday afternoon for a cycle ride in the local park. This time it was only the ‘lads’. The sons stopped at their favourite play area and just enjoyed movement on the apparatus. Here you can see them. All problems forgotten as they just enjoyed being boys, like any others.

Later they had ice cream before we cycled further around the park. At the end I said we had to stop. It was warm and I needed a rest with a cool beer. I enjoyed that as they drank orange juice and water. The eldest son asked about beer and how it tasted. I answered and then said to his father that it was only a question of time before he drank his first beer with other boys his age. His father said he knew that.

We jumped back onto the bikes and returned to the refugee home in time for supper. The boys were hungry. No surprise there! A very pleasant weekend, but I was reminded again of how difficult it is for the family to live in a small room and the problems to find an appropriate flat.