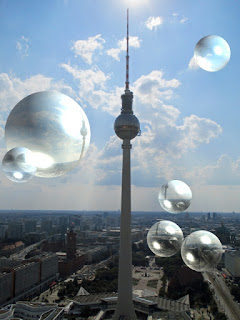 Alex is often used in Berlin to refer to Alexander Platz. It is one of the top tourist sites. It’s name goes back to Czar/Tsar Alexander of Russia, wars against Napoleon, and eventual victory in which the Russian army played an important part. I’m sure you were told all about this in your school history lessons. 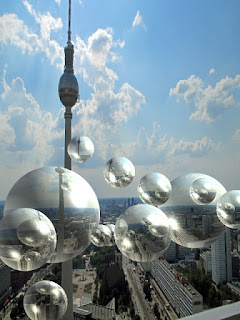 Last Friday afternoon I went to my Photoshop Gang meeting to find most on holiday or ill. Reduced to two plus Stefan we finished off the coffee and cakes then went to the computers. We are having an exhibition of our works soon so we got more information about that before booting the computers.

Our topic is ‘Berlin from Above’ and we still had some photos waiting for changes. I selected a shot of Alex Platz and opened a photo change programme called PhotoImpact. We still have a lot to learn about how to use it. I decided to play around with bubbles again. I took 30 minutes to look at other options before deciding on bubbles.

I added a few and liked the idea of more bubbles so I produced another one. I enjoyed playing around with this image of central Berlin. I really have to learn more about this programme.