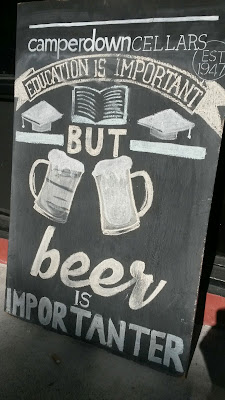 Been busy since my last post and the weather was warm and sunny. When not galloping about I listen to music on my internet radio or to BBC Radio 4. This was the flagship of English language use. I use the word ‘was’ because sadly that is all in the past.

I paid attention to use of the language during the evening news programme, and after I had received this photo. It came from a reader in Ozland. Perhaps it indicates how far use of language in different English speaking countries is drifting away from standard English.

On the Radio 4 programme in only ten minutes I heard the following from professional journalists, sports commentators, a Professor and a Government Minister.

“There wasn’t no longer…” = yes, a double negative. “The Treasury are seen..”, “The Brexit side are focussed..”, “Manchester United are listed….”, ” M. United have to be at…”
So what is the problem here?  Yes, they don’t know the singular from the plural.

Another one was, “A population who are..” Here the speaker does not know when to use the words ‘who, which, that, nor the difference between singular and plural’.  Finally the use of around instead of about – “Facts and figures around immigration…..”. I take it that the British Government has no facts and figures about immigration.

Now let’s all go to a park and play around a roundabout !!! As you do so remember there are now only issues in the language and no problems. That is the ‘importantertesteren’ for you to remember:-))