From the GPO  we walked south to the Liffey and crossed at Ha’penny Bridge. Again, another tourist draw and with lots of people even though the weather was cool and cloudy. Walked along Wellington Quay, turned left at Grattan Bridge, said hello to City Hall and entered Dublin Castle. 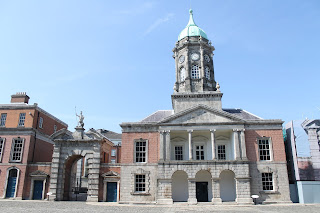 This must be on your list of places to visit after you have been to the Leinster House buildings. Again I have to use the words ‘a complex of buildings’. It started life as a small Viking settlement then as a defence area. Later, King John of England ordered that a round castle be built. It was and then other buildings were added. Only the original round castle survives from this time and is called the Record Tower. You can see it in one of these photos.

The Castle area was later the centre of English administration in Ireland, included a prison, court of justice, treasury and armory. Now its halls are used for state occasions and ceremonies. There is also a museum about the Viking period in Ireland and in another set of buildings you can find the Chester Beatty Library. 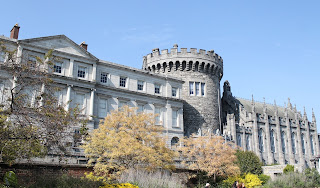 He was a mining engineer who made a fortune in the USA. He was born in New York in 1875.  In 1912 he moved to England. He travelled a lot and collected works of art. During WW2 he helped the British government in supplies of strategic raw materials and was later knighted. He moved to Ireland in 1950 and built a library for his art collection which opened in 1954. In 1957, he became Ireland’s first honorary citizen. On his death the collection was moved to a special building in Dublin Castle. 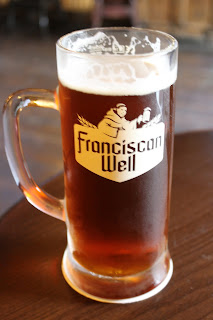 We spent hours wandering around the collection. It is an amazing mixture of works of art from all over the world. From the Middle East, India, China, Far East, Latin America, Africa Europe and ranges from texts, paintings, sketches to photographs. In addition to displays there is a library where you can read documents written in a wide range of languages. You need time to enjoy this collection.

We left in the early evening and nearby found a traditional Irish pub. I really needed to sip a local beer – as you can see from this photo. We were both hungry and Jarlath asked me where I wanted to eat for it was my birthday and it was my choice. Guess what I said? “The nearest fish ‘n chip shop.” Jarlath stared at me. “It’s your birthday. What about a restaurant?” “Yes I know, but I want fish ‘n chips.”

We found one three shops away from the pub. Very good service and equally good fish ‘n chips. The fish was cod from the Atlantic and the batter was thin and crisp, just as it should be! Was I happy as we left and started on the way home. This took us past a shop where I bought a pullover in green, but then I told you about that in an earlier post.