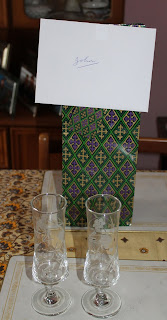 With my head still full of historical images I descended the stairs for my birthday breakfast. It was the same as everyday to accompany two tablets against high blood pressure and clotting. Jarlath was sprawled on the couch tapping on his smartphone as usual. With his hearing problem it is easier to communicate by sms. 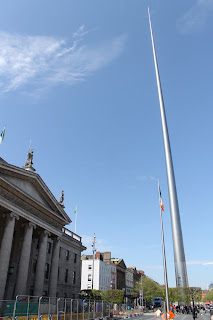 We greeted each other and then I saw a nice present on the table. A card and superior bottle of red wine from France. Mmmmh, it was delicious and we consumed it over two evenings on our return. We decided to go into town and focus on the GPO area and Dublin Castle. 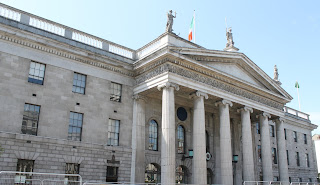 The General Post Office on O’Connell Street is a centre point of any visit to Dublin. It was taken over and used as HQ by the leaders of the Easter Rising 1916. The British Army later shelled it to a ruin and it was rebuilt to its original plan after independence. It now houses a museum telling the story of the rising and its aftermath plus a large post office room exactly as it was! 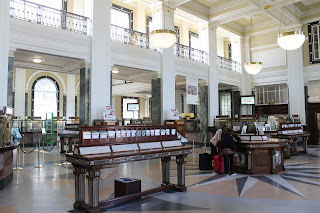 We started our adventure by walking from Tara Rail Station, crossed the Liffey to the north and walked to the east for ten minutes to arrive at the GPO with the new Needle Tower built to commemorate the year 2000. The street and GPO area is a major attraction for tourists regardless of time or season. I heard many languages as we walked to the building.

We were able to get entrance tickets for seniors over 70. When I told the lady at the counter it was my birthday there were lots of greetings and chat from her and the security guards. A nice way to start the tour. The historical presentation is first class. They have a small hall with a large screen on which you can see actors playing the role of the 7 leaders. They were all later executed and many on the date of my birthday!!