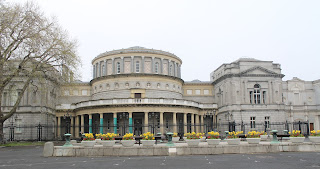 Saturday after my arrival, a coastal walk and a deep sleep. Jarlath was already up and ready for the day as I staggered downstairs. He had to drive to Tullamore for a family christening so he gave me a key, showed me the security codes for the house and jumped into his car. The weather was cool and cloudy unlike the weather in Berlin. 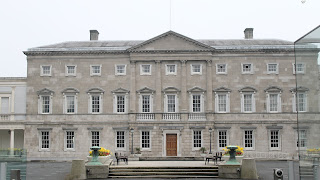 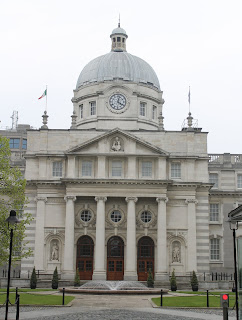 I’ll list them with the date of construction. Top left is The National Museum 1890. Top right is Leinster House. This was built in 1745 for the Earl of Kildare. Other members of the ‘gentry’ moved into the area south of the Liffey after he moved in! From 1814 to 1924 it was home to the Royal Dublin Society. From 1925 to the present it has been the seat of the Irish Parliament.

Bottom left are ‘Government Buildings’. In this complex you will find the Prime Ministers Office, The Cabinet Room, Attorney General’s office, The Department of Finance and Department of Public Expenditure. It was built from 1904 and opened by King George V in 1911. I bet he didn’t know his days were numbered there when he cut the ceremonial entrance cord :-)) 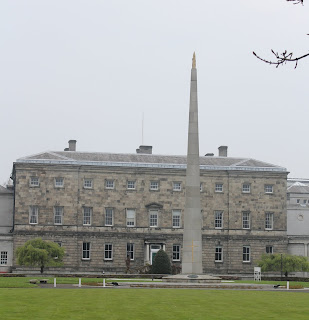 The fourth building in this area is The National Library (1877) and National Art Gallery (1864) complex. For some reason I don’t have photos of either. Don’t know why. I remember the Library was being renovated and sections were closed so that may be why.

Instead here is a photo of the Mansion House which is on a street opposite the larger complex of buildings. It has been the residence of the Lord Mayor of Dublin since 1715.

They really are a must to see when in Dublin. I spent the whole day in the museum, library and art gallery. Of course, I was not allowed to enter the government buildings but then who wants to see offices full of desks and computers?

If I had to choose only one to visit again it would be the National Museum. The variety and size of the displays are remarkable and very well presented. I learnt a lot about the history of Ireland and found the story fascinating. Make it your priority when next in Dublin.