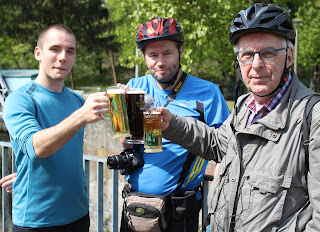 Yesterday I cycled 40 klm. It was more than enough! I was with my Müggelsee Gang. It all started on Friday when Marcel arrived. We had arranged for him to come to my place so that he could join the Gang with me at a local railway station on Saturday morning. I hardly recognised him! 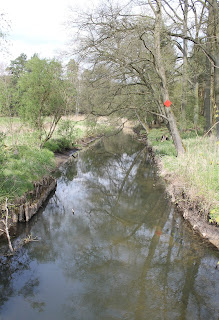 No beard and his hair cut to about 3mm plus even more muscles. He does a lot of training now in addition to lifting things in his part-time job. It was great to see him and catch up on news as he tucked into a substantial supper. Next morning we took a regional train to Eberswalde. This is a town north of Berlin and famous for producing sausages.

We met the rest of the Gang there and toasted the event in an appropriate liquid form. Yes, a drop of water from Ireland. Onto the bikes and off. Uli had organised the day and the tour took us west along a canal to Finowfurt. On the way we had our first stop. I had coffee to wake me up and a few others had something else. See photo above. 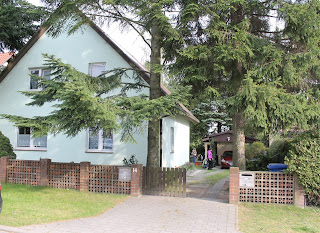 We then turned south and cycled to an area called the Biesenthaler Becken. Just before arriving we stopped in a wood for a picnic lunch. Delicious as usual. We had another stop at the Schlossberg Biesenthal. Some climbed to the top of the old fortress and took photos. We then cycled south-west and finally arrived at Schönow which is just to the west of Bernau-near-Berlin. 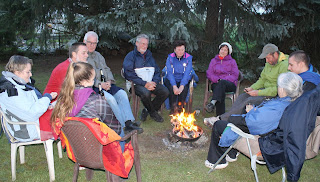 Larissa and husband H-D were waiting for us in the large garden of their house. See photo. There we relaxed with liquid refreshments and grilled as it got dark. We moved to circle an open fire in the garden as we talked, had a few more drinks and sang traditional folk songs. ‘The Birnbaum’  was very popular and I sang one verse!

Time to go home. Sad to say goodbye to our generous  hosts. We cycled to a nearby S-Bahn and settled into the journey to our respective homes. I got home at 11.40pm and reflected on a day I didn’t want to end. I also had the words of Falk in my ears that I should buy an electro-bike for our next long tour. I’ll think about it :-))