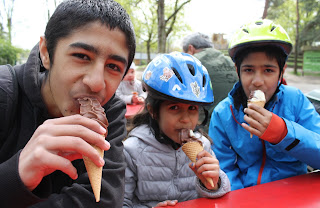 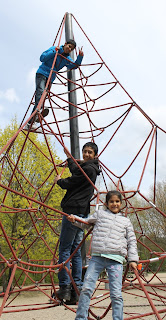 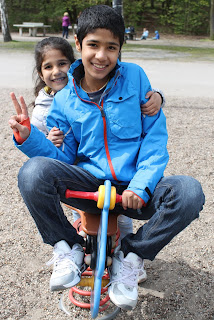 After the handing over of a razor ceremony last Saturday, the kids played football with me for a bit then agreed to cycle to a local park. They have 2 bicycles from the bicycle repair service in the home and borrowed another one. The park is big and called Wuhlheide (Thanks for correction Uli ). It is only about 10 minutes from where I live.

I quickly noted how they adjusted to cycling and paid attention to traffic/safety rules. We finally arrived in the park and began to explore all the facilities. I know this park well but it was the first visit for the children. I decided to stop at a small cafe and bought them ice cream. From their faces on this photo you can see they enjoyed the cold stuff in the cone. 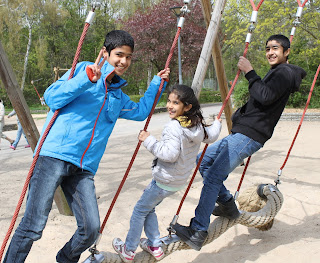 Off again and around the corner we found a play area. They wanted to stop and play. I readily agreed. Here you can see them having fun. It was great to sit back and just watch them play. No language problems, no cultural problems. They were just children of different ages having fun in the playground just like children from anywhere. I think you can see that on their faces.

We then cycled over the park area and they saw all the facilities on offer. The boys were interested in the football field and facilities for skateboarding. I wonder if that will be the next thing they ask for! I noted that sister P was getting tired so we slowed down and gently cycled to an exit and then to their refugee home.

‘Vadda’ was waiting for us and the children told him all about the park visit. Son A2 asked me if we could go there again and spend more time exploring areas they had not seem. I told him that we would do that and so I got a very large smile :-))

I really liked the time I spent with them and look forward to cycling to other areas in the next few weeks – perhaps with a picnic stop. We need to get more bicycles so that the parents can join in. I’m sure we’ll find a solution to that problem.