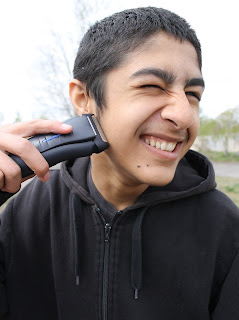 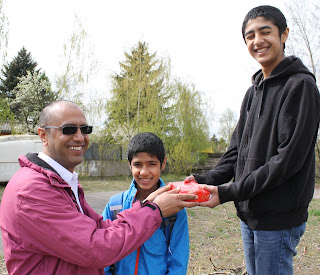 Peering into a mirror and shaving is a daily ritual for most men. Growing a beard is the best way out of this ritual. The first shave is an important ‘rite of passage’ for all boys whose voice has deepened and noticed hair growing on the face. And lo it came to pass for A1.

Thanks to a donation from a nice couple who do not live in Europe, I had the funds to buy A1 an electric razor. His father had told me that some of the other boys in his class made fun of his growing ‘hirsute’ appearance. Time for action. Step 1 was get a razor. 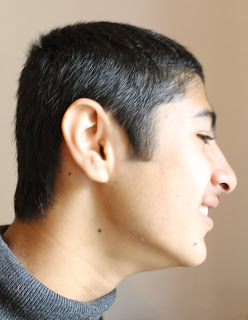 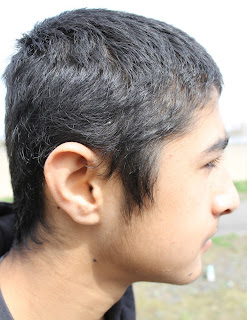 Step 2 was organise a little ritual to mark the event. I went to the Refugee Home where A1 lives with his family in one room. The ‘boys’ gathered in a wooded area outside the home.  We then started another ritual which generated lots of smiles and laughs.

I told A1 to stand on a stone to make him higher. He then had to hold out his hands. The rest formed a semi-circle and then we bowed to him. Lots of laughter. We bowed three times as A1 started to really like the attention. ‘Vadda’ then stepped forward and offered son No.1 a present. Son No.2 helped his brother to open the packet. Lots of Ooooohs and Aaaaaahs as the family saw it was an electric razor.

I then told A1 that all men make faces when they shave so he had to practice. He enjoyed that and I got some nice shots. Later they came to my place and I gave the boys a hair trim before A1 switched on the razor and gave himself his first shave. He beamed like a sun as he guided the machine over his cheeks. I took a photo of before and after. The difference is clear.

Little brother A2 looked at me sadly and asked if he could have a razor. I said he had to wait another year. Let’s see how long it takes before his beard grows and we repeat the handing over ritual!