This is a new(ish) word in Dinglish. I don’t like it but then some academics say that there are now 11,000 Dinglish words. It starts from the English word shopping and is ‘Dinglified’ by adding ‘c’ to sh and then -en instead of -ing because this is the ending of all German verbs. Yuk! 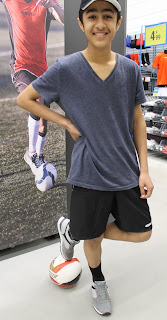 So I met my adopted family at 10.30 am to go ‘schoppen’ in a ‘schoppen’ centre south of where I live and to which the family had not been. There is a new complex in construction and a couple of companies had opened shops. One was a sports shop. We headed there.

As we walked there an unexpected thing happened. A family approached us, local for they were speaking ‘Berlinisch’. As they approached us they stopped talking and stared. There was a boy of about 10/11 in the family. As he approached the younger brother (A2) of my family, he pulled a plastic gun from his belt, aimed it at A2 and fired. In German he said the equivalent of ‘Gotcher’, swore at him then caught up with his family.

I just stared in disbelief too shocked to say or do anything. How can a boy of that age do such a thing? What has he learnt in his 10/11 years and from whom? Parents, family, school friends?  This really is the other side to those tolerant Germans who give clothes and time to support refugees. 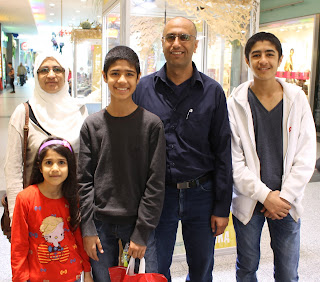 We went into the new sports shop and the children loved it. They ran around looking at all kinds of things for sporting activities until we took them to the sport-football corner.  Big brother (A1) needed sport shorts for school sports. I had previously got him sport shoes and T-shirt. We found a pair he liked. He asked me to take a photo so he could send it to his friends who do not live in Germany. I agreed and you can see he really looks like a young football player.

We then went into the main shopping centre. There we bought the boys sports socks and then I discovered that they only had two pairs of underpants. Yes, one in the wash and the other worn until the washed one was dry. I could not believe this and so insisted we bought them more. The boys were happy as they chose different styles and colours. This was a bonus for them. Why hadn’t the parents told me about this before?

The money I had collected was already spent so I financed this and other needed purchases via my bankcard. I am confident others will donate in the future and make up the deficit. Meanwhile, we have a happier family and two boys who can wear clean underpants each day when they go to school!