I was robbed this morning on my way to the AWO building. I was in the U-Bahn heading to Frankfurter Allee station. I took my wallet out of my rucksack, removed €10 to pay for some food for lunch and put the wallet back. Someone else had seen all this.

I left the train, bought lunch, paid and put the change in my pocket. I walked up the steps and a couple of minutes later I was in the teaching room in the AWO building. As I put my rucksack on the table, I noticed the outer pocket was open. This is where I always place my wallet. 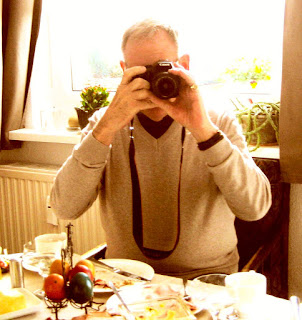 There was no wallet. I went into the office and called the police. They told my to contact BVG = local transport company. I did just that after waiting 10 minutes to get through. The BVG lady told me to go the BVG centre in Alexander Platz. I was about to set off when my mobile rang.

It was a BVG security officer responsible for the local station. My wallet had been found in a rubbish bin on the platform. Two minutes later I was there accompanied by Maria to act as my witness. The officer explained that a man who collects empty bottles from rubbish bins to get the deposit money had found my wallet and given it to the officer.

All the money was gone but all my papers and monthly travel permit were in the wallet. My wallet contained €50 donated to buy sports clothes/shoes for the refugee family children plus €30 of my money. Guess what I would do to the thief? I would begin by sawing off his arms. Yes, I know I am getting more liberal in my old age!!! I shall go to the bank tomorrow and make up the children’s money. I am meeting father and sons on Thursday to buy what they need.

And now to watch TV. The German team is playing Italy in another friendly. Germany is still getting over the shock of the last game against England. I believe the trainer has made 5 player changes. I think Italy will win. Daniel does not agree. He told me earlier this evening that Germany will win. Let’s see.  UPDATE: Daniel was right. Result was Germany 4 – Italy 1, but then it was not the same bunch of third raters who played against England.

Now where did I put my mobile saw??