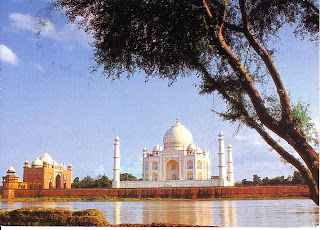 What does Taj Mahal mean? Most people on this planet have heard of it, and many have been to see it – including Jan and Arancha.  Stop scratching your head and muttering that you used to know the answer. I’ll tell you! Taj is the English shortcut of Taz which is a reduction of Mumtaz.

Still scratching your head? She was the wife of the Moghul Emperor of India in the mid.1600s, name of Shah Jahan. Her name was Mumtaz. She died while carrying their 11th child. Shah Jahan was heartbroken. He ordered that two memorials be built opposite Lal Kila (Red Fort) in Agra from where he ruled. 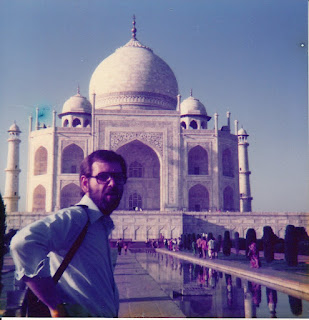 Why have we only got one? Before this black marble ‘Jahan Mahal’ could be built, his son led a coup against him. End of construction. Shah Jahan was imprisoned in rooms looking directly onto the Taj Mahal. When he died, his body was placed next to Mumtaz in her Mahal. I always find this a touching story and one that reminds us of the power of love.

Here is a picture from a postcard sent to me by Heike. She was recently on a cruise which took in a gallop to famous places in India. Thanks liebe Heike. The other photo is of ‘guess who with a beard’ and taken many years ago. When was it taken? Wake up Daniel, this a question for you  and Sherlock Holmes to find the answer, and by next Tuesday!