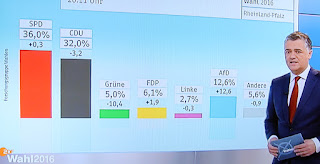 It’s late and I have been watching different TV News programmes about votes in three states in the German Republic. I’m watching a special programme as I write these words. It is called ‘maybrit illner spezial on ZDF. Representatives of the main parties in Germany are in the studio and commenting on the results of the elections today.

There was a vote in three states. Nearly 13 million people could vote and about 56% took the trouble to move their bottoms out of bed/chair/pub and stick a X on a piece of paper in a voting booth.  The theme that dominated the election was that of accepting refugees. A new(ish) party called AfD is against the current policy so all were interested to see how the people had voted. 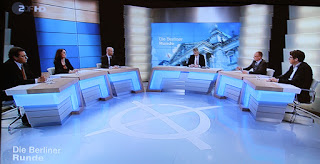 It was a bad result for the CDU and SPD and a good one for the AfD. This party is identified with right wing populist policies and has attracted many known neo-Nazis to meetings and to support it. In one state this party polled nearly 25% of the vote and came second. This has created a shock and the current TV programme is discussing the results.

The leader of the AfD is in this programme. No, not a man but a women and her deputy is also a women. The deputy recently made a name for herself by calling for soldiers to control the borders and if necessary to shoot at those who illegally cross — even if they are women and children! You can imagine how many eyebrows were raised on hearing that!

I wonder what my local SPD members will say about this result when I meet the Oldies on Tuesday afternoon. The vote is clearly a smack in the face for the current central government policy. I wonder how they will react.  The picture of the group in a studio above is not that of those in the current programme.