I have spent all this morning, and half of the afternoon, trying to understand a lot of text written in ‘Amtsdeutsch’. It is horrible and I think it must be the reason why German never became a world language, although it is important in central/east Europe. 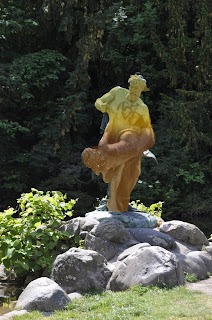 The language is the slave to the master ‘der-die-das’ which means you have to build huge compound nouns which not only stretch around the block, but disappear behind it!  Try to get your mouth around these:-

Why this language torture today? I have a number of meetings in the next few weeks and received documents written in Amtsdeutsch, so I have been preparing myself. It is not the kind of German that foreigners learn in class, but it is the language of the letters/documents they receive. No wonder they need translators.

Many German friends tell me they don’t always understand the letters/ documents they receive from government departments, banks, insurance companies or business. That is a relief!  At least liebe Andrea understands it all for it is the daily language of her work. Now back to the texts and writing notes for the meetings!

On a lighter side: Here is the statue I created with new colours last Friday with my Photoshop Gang.