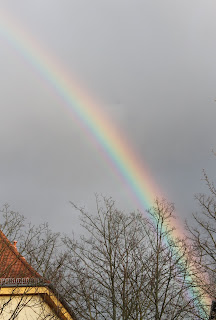 I’ve had a busy week and only just managed to take this shot. I wandered into the kitchen after crawling out of bed on Wednesday morning. I looked out of the window and blinked. A rainbow was forming!

I rushed into the bedroom and snatched my camera from the shelf where it sleeps when not in use. I ran back into the kitchen and noticed the rainbow had fully formed and was starting to contract. Oh, no!

I quickly opened the case and took out the camera. Still with one eye on the disappearing rainbow, I took it out and switched it on. I quickly found the setting I wanted and then opened the balcony door.

Onto the balcony and press, press on the camera. I got two shots as the rainbow disappeared in front of my eyes. Twenty seconds later and it was gone. At least I have this shot. I wonder what there is about a rainbow that makes us smile and feel so happy.

I plan a lazy weekend for I have a lot of paperwork to work through. I need to understand the content for a few meetings I have next week and the week after. The text is written in ‘Amts-Deutsch’. This is the language of the office and bureaucrat. You don’t learn this in German for Foreigner classes!