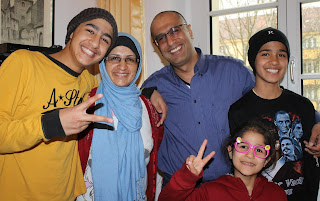 Last Thursday afternoon the doorbell rang. I went to the front window and looked out. It was family F. I recently posted about father and daughter, but this time it was all of them. It was the first time the family had visited. 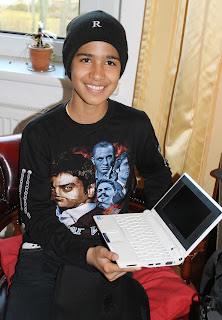 It was raining so they entered my flat with a couple of umbrellas. Mama immediately took charge. Where were the wet umbrellas to go so they would not wet the flat? Then the command to husband and children to take shoes off. I said it was not necessary, but Mama over ruled me and the family obeyed!

They settled into my living room and said how nice and warm it was. I offered water and orange juice, which were accepted. We caught up on news and then the parents asked about my TV. They had not seen a TV programme for months. I switched it on and found a cartoon programme for children.

All settled into the cartoon as they sipped their orange juice. We older ones decided on green tea with cake and so that later appeared on the table. I talked to the family about the boys going to school to learn German. They are still on a waiting list. I decided to give them some dictation.

I threw my Baby Laptop to the younger son and he opened it with no problem! The older one had my Windows Laptop and both started to type the text I spoke in German. I was surprised at how they reacted and it was clear to me that they needed to go to a school.

Next week I am going to talk to a couple of people ‘in politics’ about getting them into a school. They are clearly ready and I am curious as to why they have not been placed in a school.